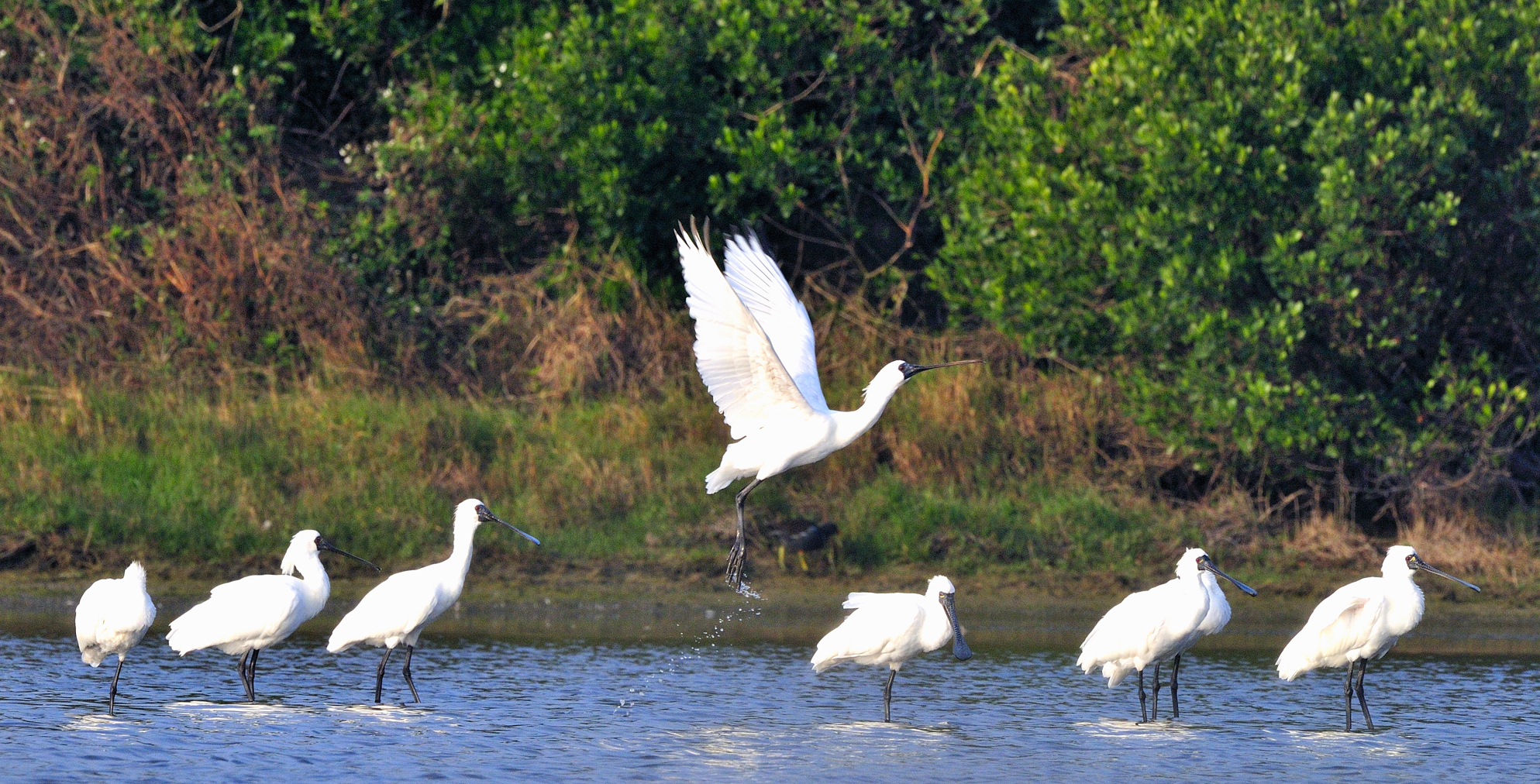 Results of the 2020 Taiwan Black-faced Spoonbill Census revealed a total of 2,785 wintering in Taiwan proper and its outlying islands, up 378 from last year and a new record. With annual census numbers consistently showing 50% to 60% of the global population, Taiwan is one of the most critical habitat areas for the iconic and globally threatened species. This year's survey lasted from January 17-19, with results released in early April. 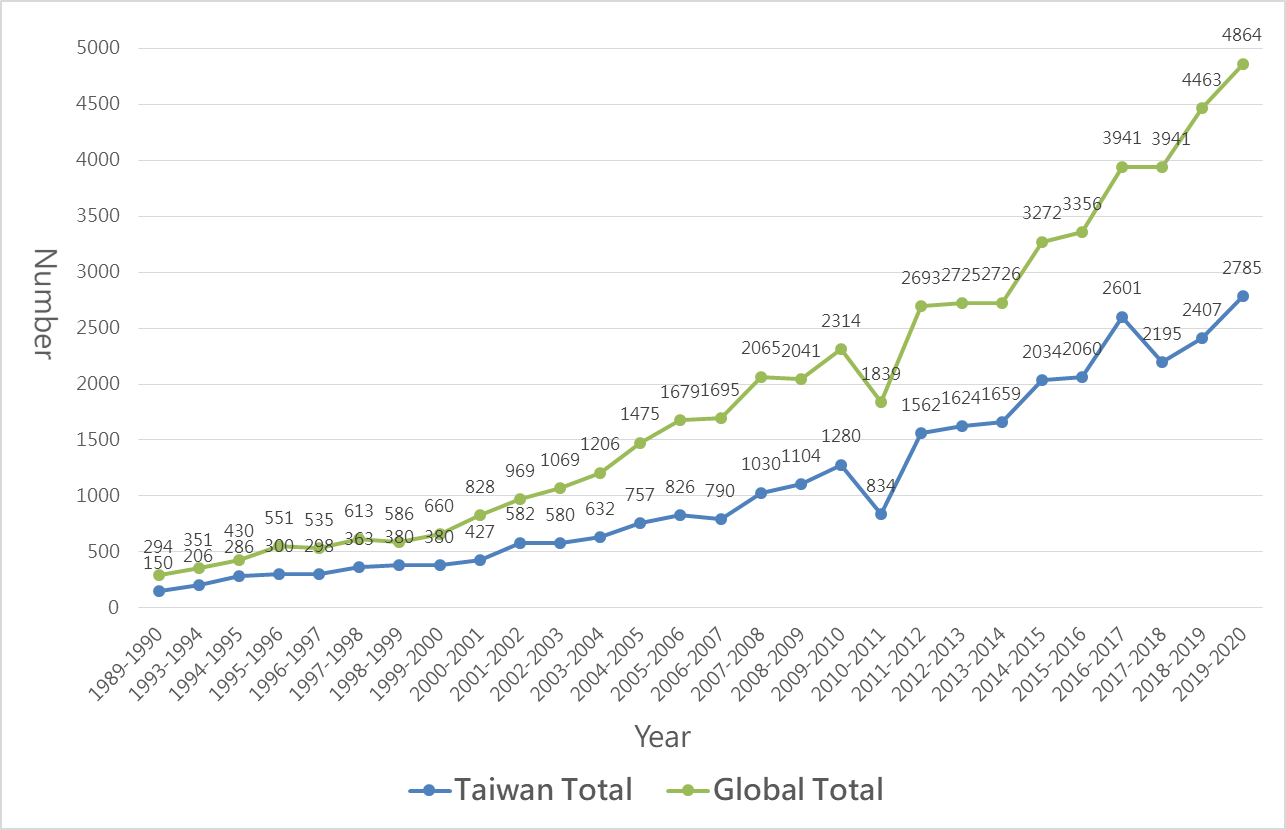 The count was done in coordination with the 2020 International Black-faced Spoonbill Census. This international event is organized by the Hong Kong Bird Watching Society and sees participating groups representing all of the migratory waterbird's range take part. With a total of 4,864 birds recorded, it shattered the global record set just last year. Taiwan numbers accounted for 57.4% of the global population this year.

The wintering population of Black-faced Spoonbills in Taiwan are mainly found in southwestern Taiwan's Tainan City, Chiayi County, and Kaohsiung City, with Tainan being by far the most important. The number recorded there this year was 1,839 (66% of the national total), an increase of 267 compared with last year. They were mainly concentrated in the city's Qigu District and Annan District's Sicao area. This number is also an increase of over a thousand compared to 2014. Another 550 (19.8%) were located in Chiayi County, concentrated in the Budai and Aogu wetlands. Kaohsiung City had 241 (8.7%), mainly in the Qieding and Yongan Wetlands as well as the Gaoping River. Yunlin County, where the population is mainly concentrated in the Chenhglong and Yiwu Wetlands, has seen a continued rise in recent years, with the number reaching 102 (3.7%), almost double that of last year. Yilan County and the outlying Kinmen Islands maintained small but stable populations, with each recording a total of 24 birds. 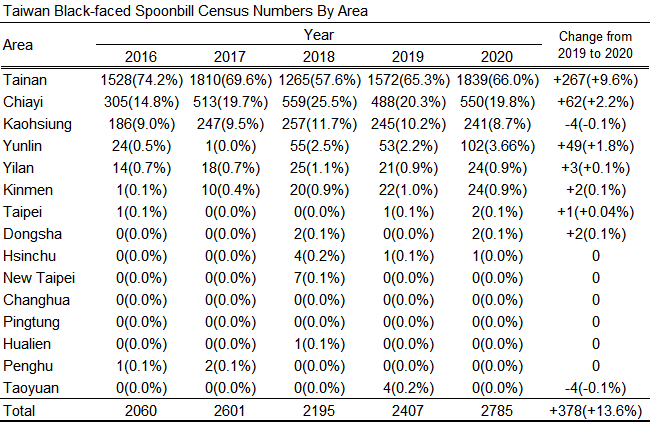 The Black-faced Spoonbill is currently listed as endangered by the International Union for the Conservation of Nature (IUCN). In 1994 when the International Black-faced Spoonbill Census began, less than 400 birds were counted globally. However, the population has bounced back from the brink of extinction. Last year's total of 4,463 marked the first time in census history that the number exceeded 4,000. Black-faced Spoonbills are winter visitors to Taiwan, normally arriving in early fall from the Korean Peninsula, Siberia, and northern China, then returning to these areas for breeding in early spring.

Difficulties to maintaining these numbers may grow in the near future due to habitat loss. Black-faced Spoonbills heavily rely on fish ponds, salt pans, and wetlands for feeding and resting. Many areas important to them in Taiwan, including Sicao and Qigu, are recognized as Important Bird and Biodiversity Areas (IBAs) by BirdLife International for their critical importance to a number of migratory waterbirds including the Black-faced Spoonbill. Yet as part of the Taiwan government’s efforts to increase green energy capacity, a number of fish pond areas have been selected for floating photovoltaic or "floatovoltaic" projects, including Qigu and northern Tainan’s Beimen District. The Taiwan Wild Bird Federation, the Wild Bird Society of Tainan, Citizens of the Earth and the Green Citizen’s Action Alliance have joined together in calling for the government to create clear guidelines for how it will mitigate alterations to the local ecology, improve the review process required for green energy projects, and better communicate with local stakeholders. Currently the government has already approved a number of floating solar projects in these areas. The NGOs are requesting the government perform new reviews of the sites to improve transparency and the keep the government's image as one of trying to balance ecological and energy needs. 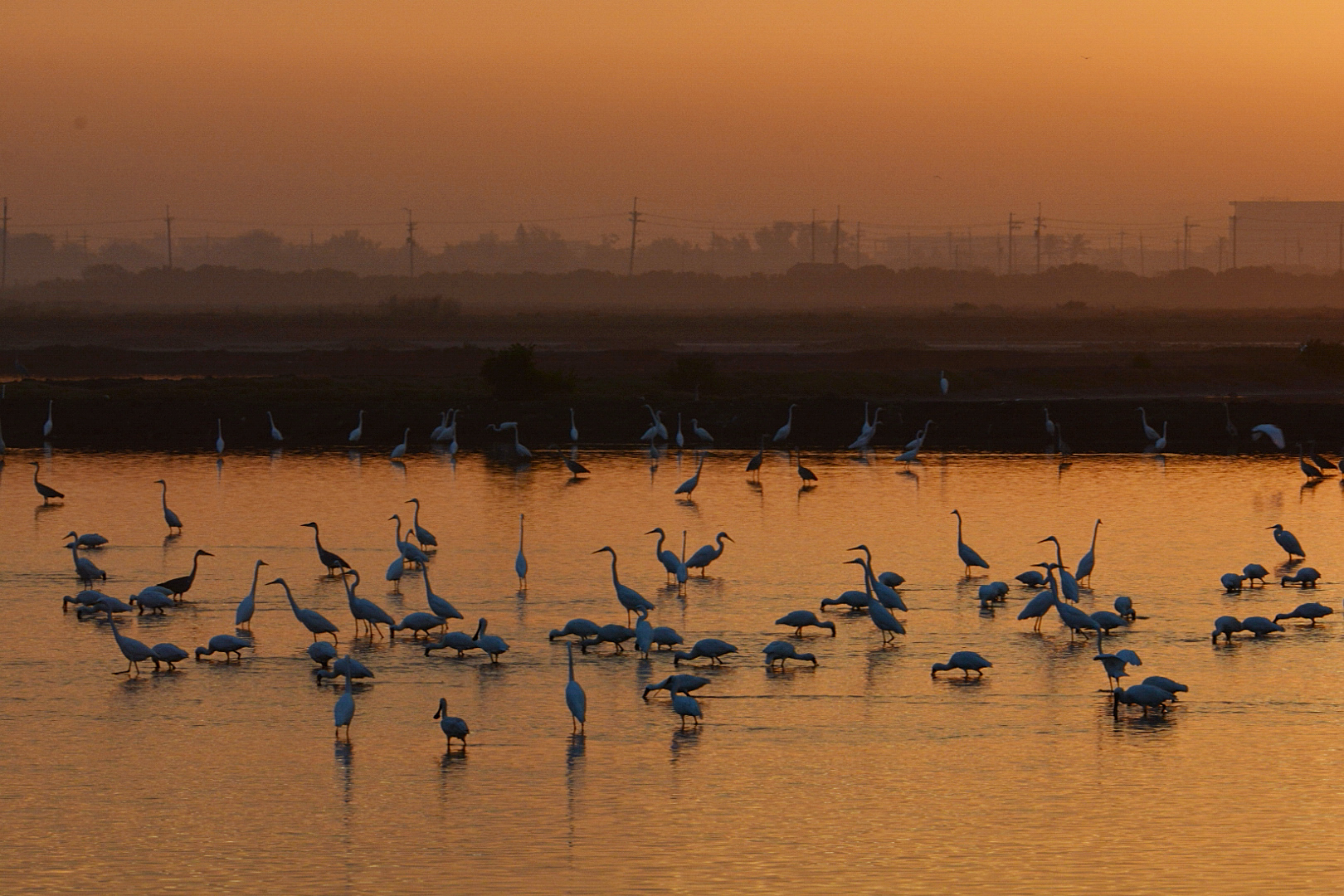