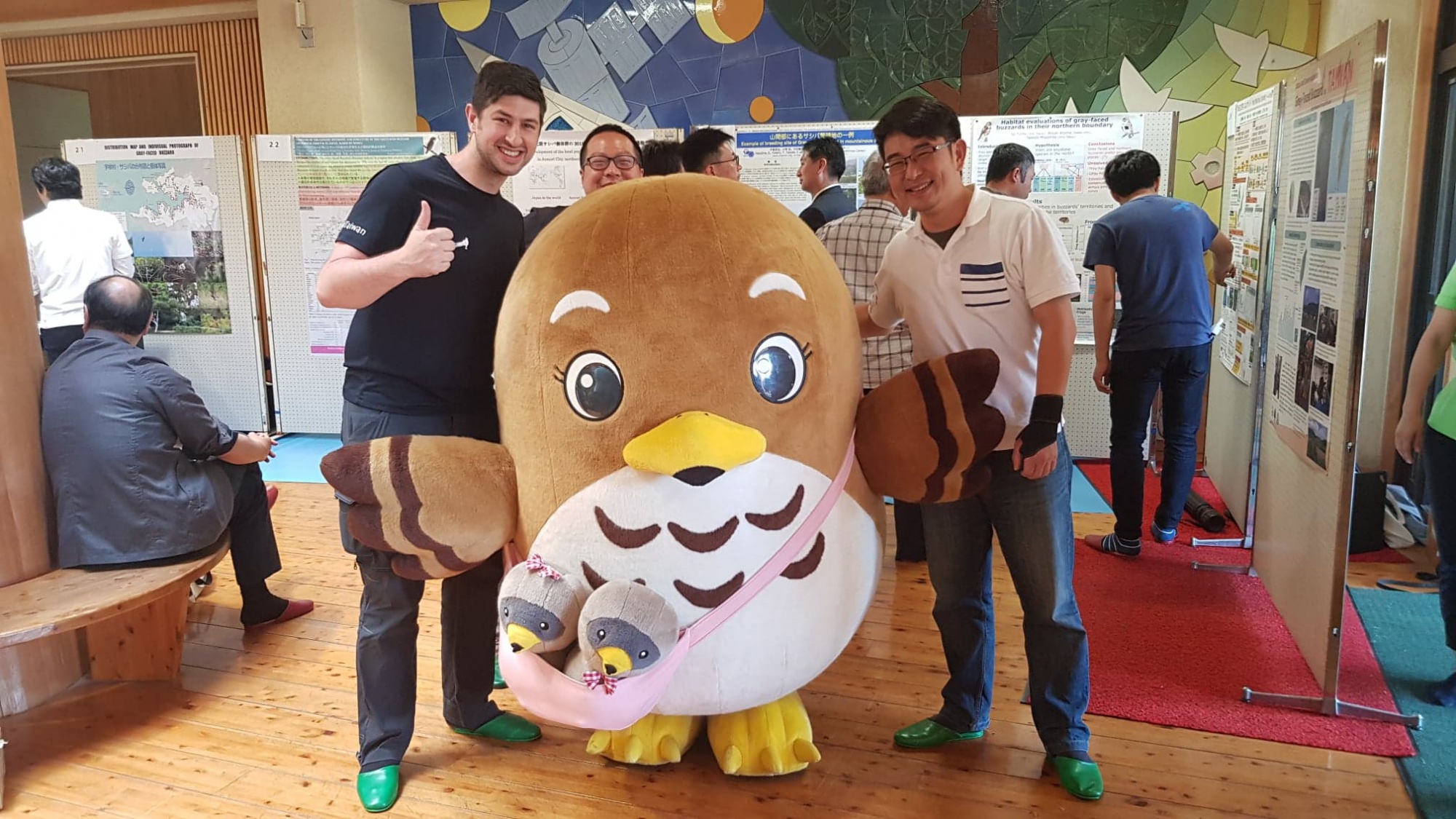 Wild Bird Federation participated in the first ever International Summit on Grey-faced Buzzard. Invited by the Wild Bird Society of Japan, the TWBF joined a number of other organizations at the summit. This included other international guests From Taiwan as well as groups from the Philippines. For TWBF, the goal of attending the Summit was twofold: to better understand conservation efforts towards protecting the Grey-faced Buzzard in Japan and to connect with the wider raptor conservation community in Asia. The organization was represented by Secretary-General Adam Lee, Director of Research Allen Lyu, and Director of International Affairs Scott Pursner.

This was the first year that the International Summit on Grey-faced Buzzards was held. It was supported by a wide range of groups and organizations. Though sponsored mainly by Suntory, the planning and execution was handled by the combined efforts of the Asian Raptor Research Conservation Network and the Wild Bird Society of Japan. They worked with local government and NGOs to coordinate the Summit schedule and activities.

The site for the Summit was in Ichikai Town, Tochigi Prefecture. This area, about a four to five hour drive north of Tokyo, was prime breeding habitat for the Grey-faced Buzzard. This was due in part to the area's maintaining of a Satoyama-style mixed usage terrain which included forested hills, rice fields, and numerous small waterways. This provided a perfect feeding area for the diverse-palated species. Due to its rural nature, guests stayed in the nearby city of Utsunomiya and took shuttle buses to the venue for the event. 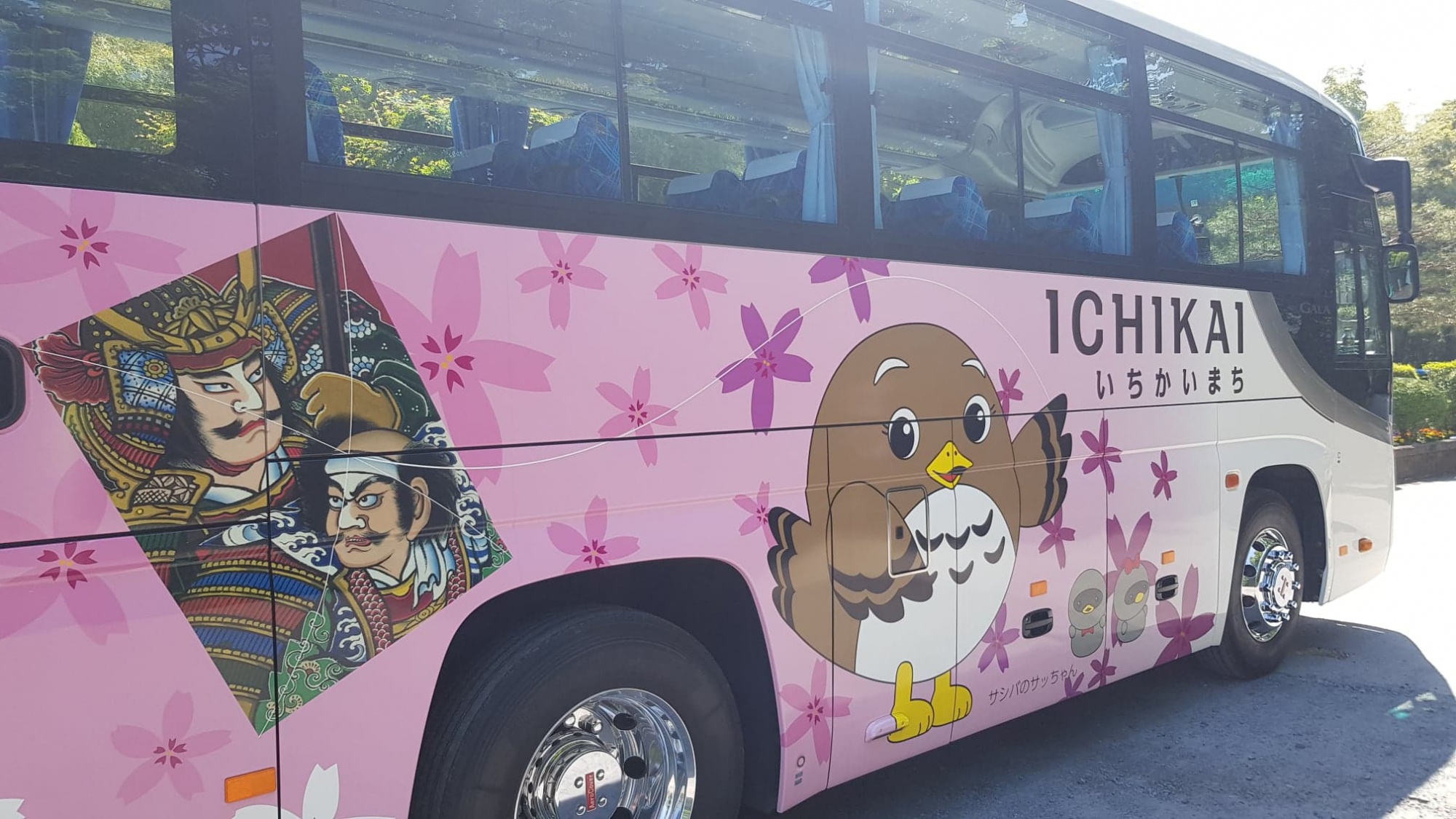 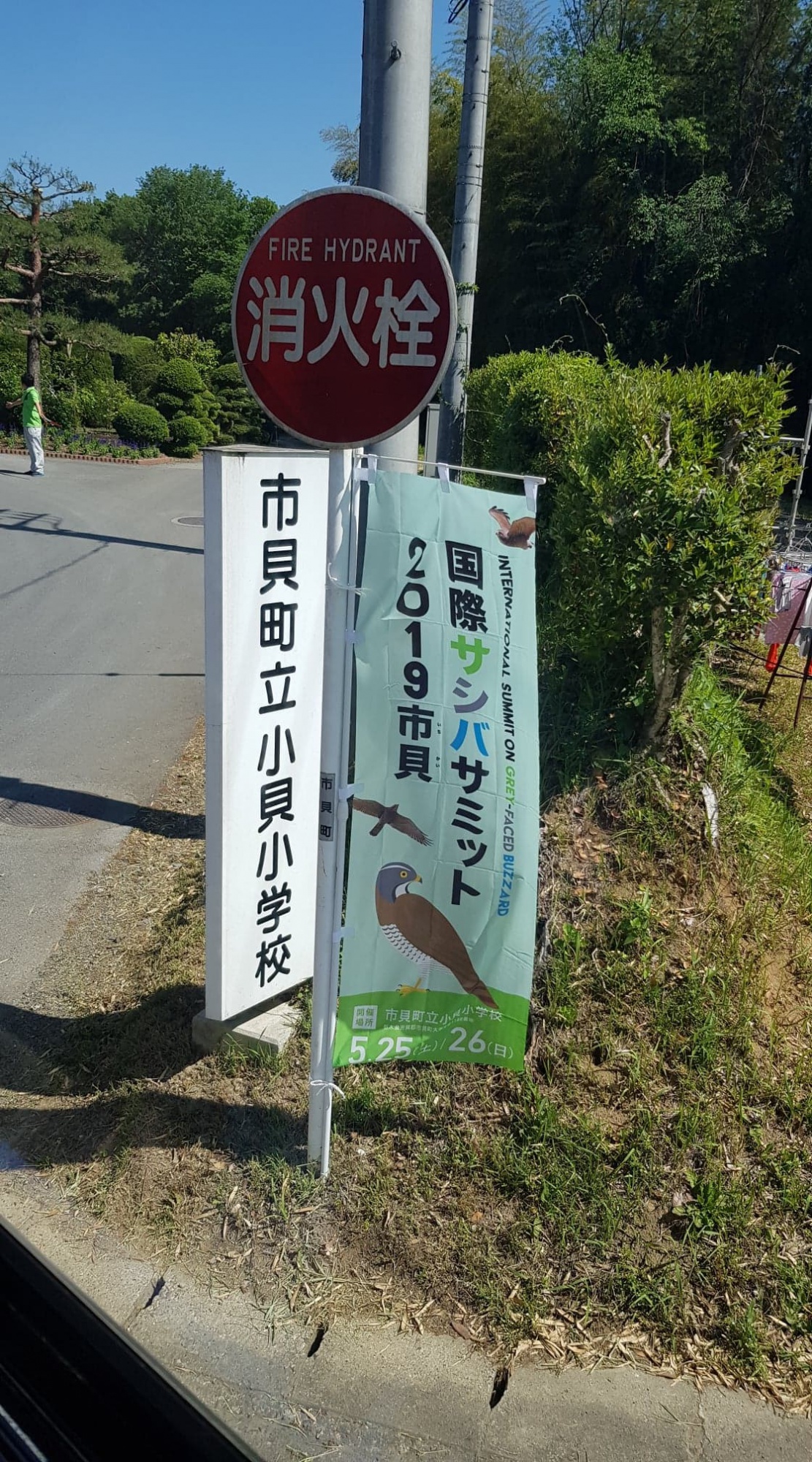 The main symposium was held on Saturday, May 25th. It began with an opening statement by the mayor of Ichikai Town, Mr. Masaaki Irino. He spoke of the need to protect the Grey-faced Buzzards for future generations and thanked all the guests, especially the international delegates, for attending. He also reiterated that conservation work must be done since as the slogan for the Wild Bird Society of Japan states: Today Birds, Tomorrow man. This was followed by students from Sugiyama Kindergarden performing Sashiba no Uta or the Grey-faced Buzzard song. Next up in the morning session were presentations abput how in both Japan and the Philippines, efforts have been taking place to do education and outreach on behalf of conservation goals. In Ichikai town, a competition was even held to create conservation-themed Haikus and Senryuu, traditional Japanese poetry styles.  Winners were announced at the summit. Rounding out the morning was a keynote speech by Professor Emeritus of the University of Tokyo, Hiroyoshi Higuchi. He spoke on how as migratory raptors, the Grey-faced Buzzard is a species which brings people from different countries together. 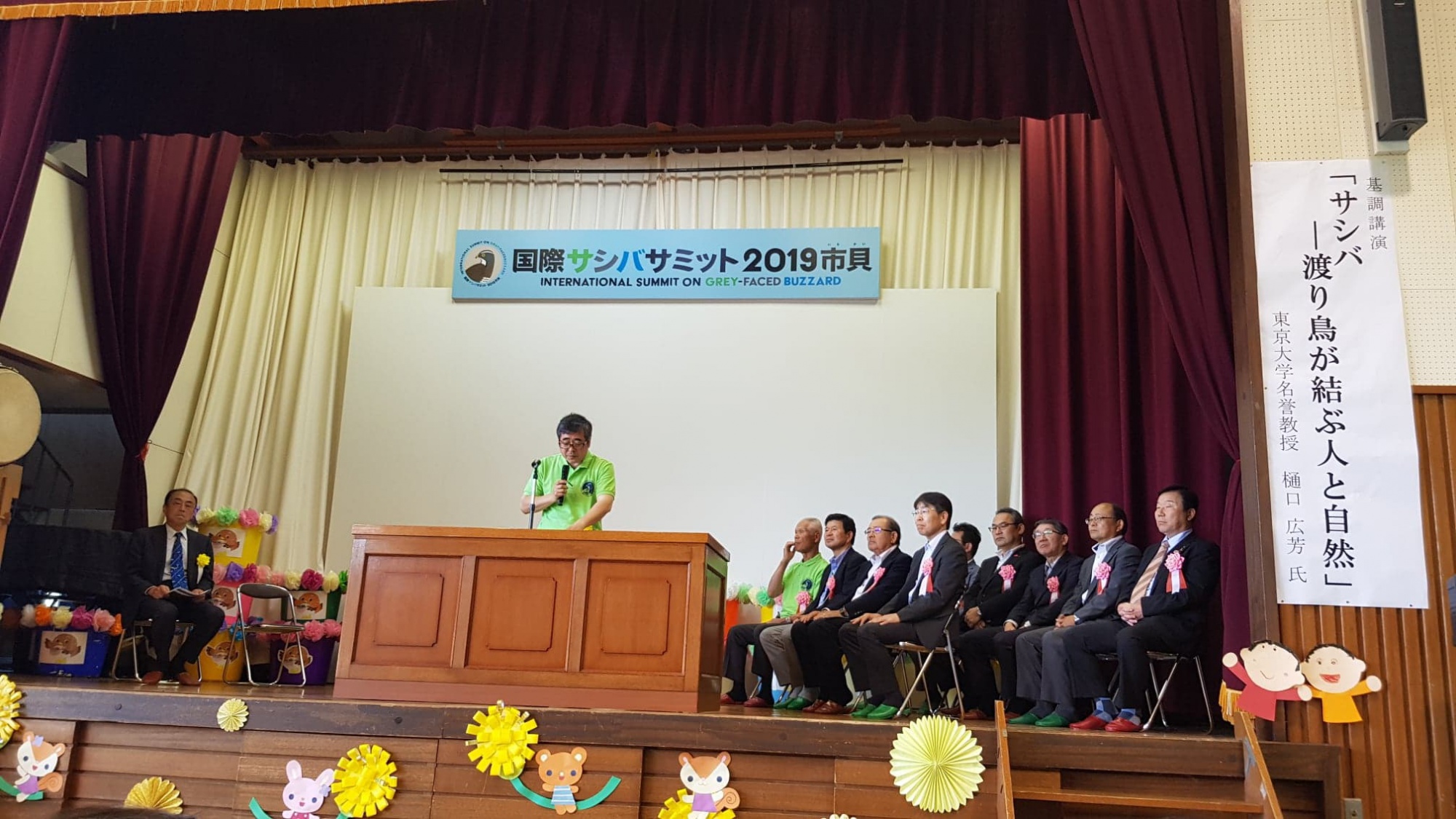 After lunch, the topics of discussion turned experience sharing. Representatives from Taiwan, the Philippines, and the Miyakojima City in Okinanwa, next year’s host of the Grey-faced Buzzard Summit, made presentations. Topics ranged from the history of the species in specific areas, scientific studies that have been done, and conservation efforts underway to promote further action. This was followed by more presentations from local NGOs on how they are trying to support the principles of Satoyama as well as conservation. It ended with the issuing of a joint declaration by the mayors of Ichikai Town and Miyakojima City in Japan as well as Sanchez Mira and Pamplona in The Philippines. The document stated that these cities would continue to work to foster dialogue on a more sustainable future that included Grey-faced Buzzards and local community needs. They would also make efforts to work with each other towards those goals and welcome others who wish to also do so. 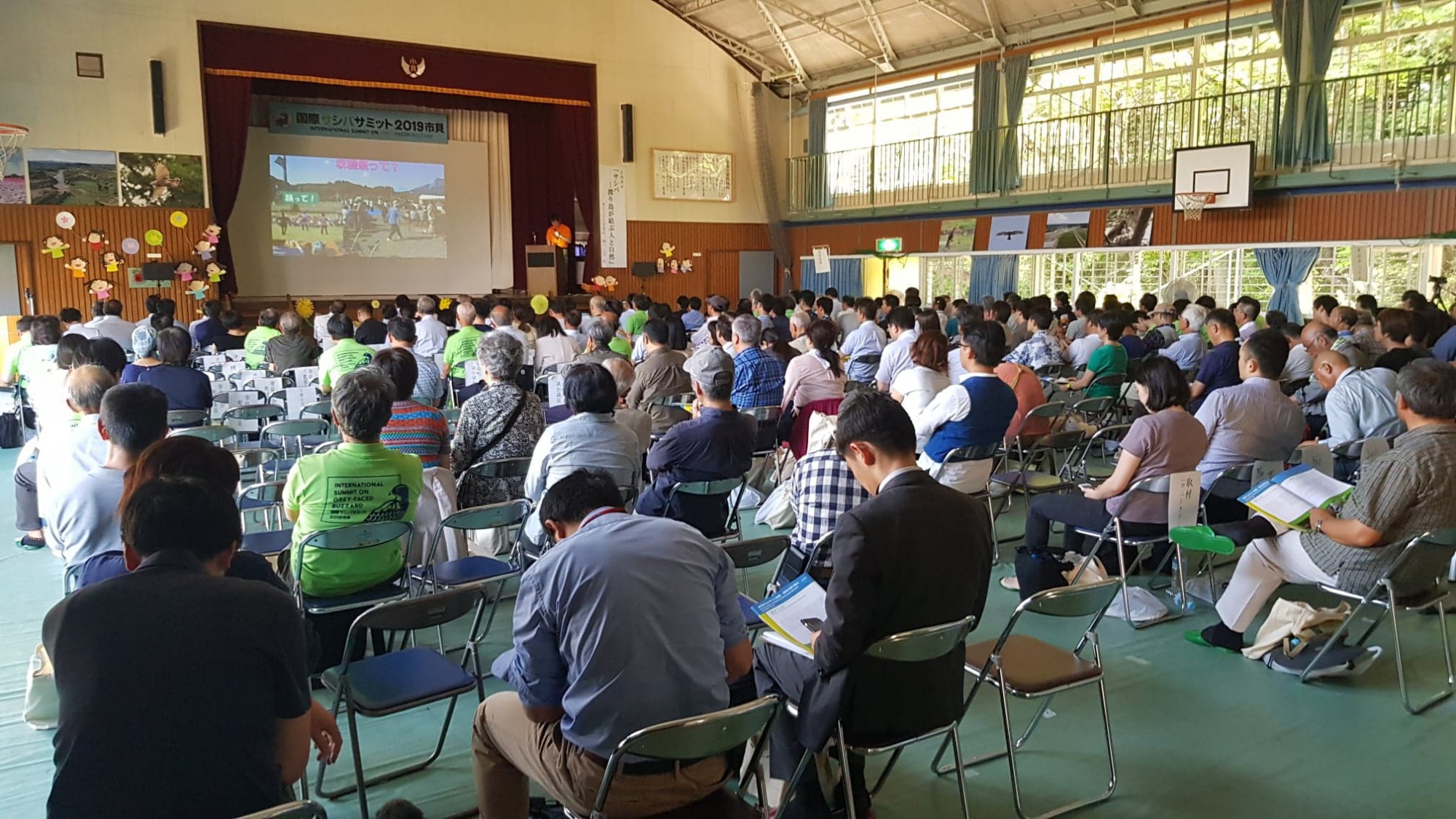 The 26th was filled with an assortment of outdoor activities. It included a visit to the Grey-faced Buzzard's breeding grounds. This was especially of interest for both the guests from Taiwan and the Philippines as one serves as a stopover site and the other its wintering grounds. It was deeply meaningful to be able to see where these graceful and important birds spend their breeding season.

This event was a really great opportunity for the TWBF to engage and work with other regional partners towards conservation goals. It allowed for the TWBF to make stronger connections with two of Taiwan's closest neighbors, Japan and the Philippines, to discuss conservation related to migratory species. This event also provided the chance for the TWBF to share the work that that its member organizations have been doing related to celebrating migratory species, such as the Wild Bird Society of Taipei’s major international birdwatching fair, or the celebration of Grey-faced Buzzards organized by the Wild Bird Society of Changhua, amongst others. Attending this event allowed a dialogue to start about ways that the TWBF could work more closely on conservation related topics with our colleagues in Japan and on raptor conservation with our colleagues in the Philippines. 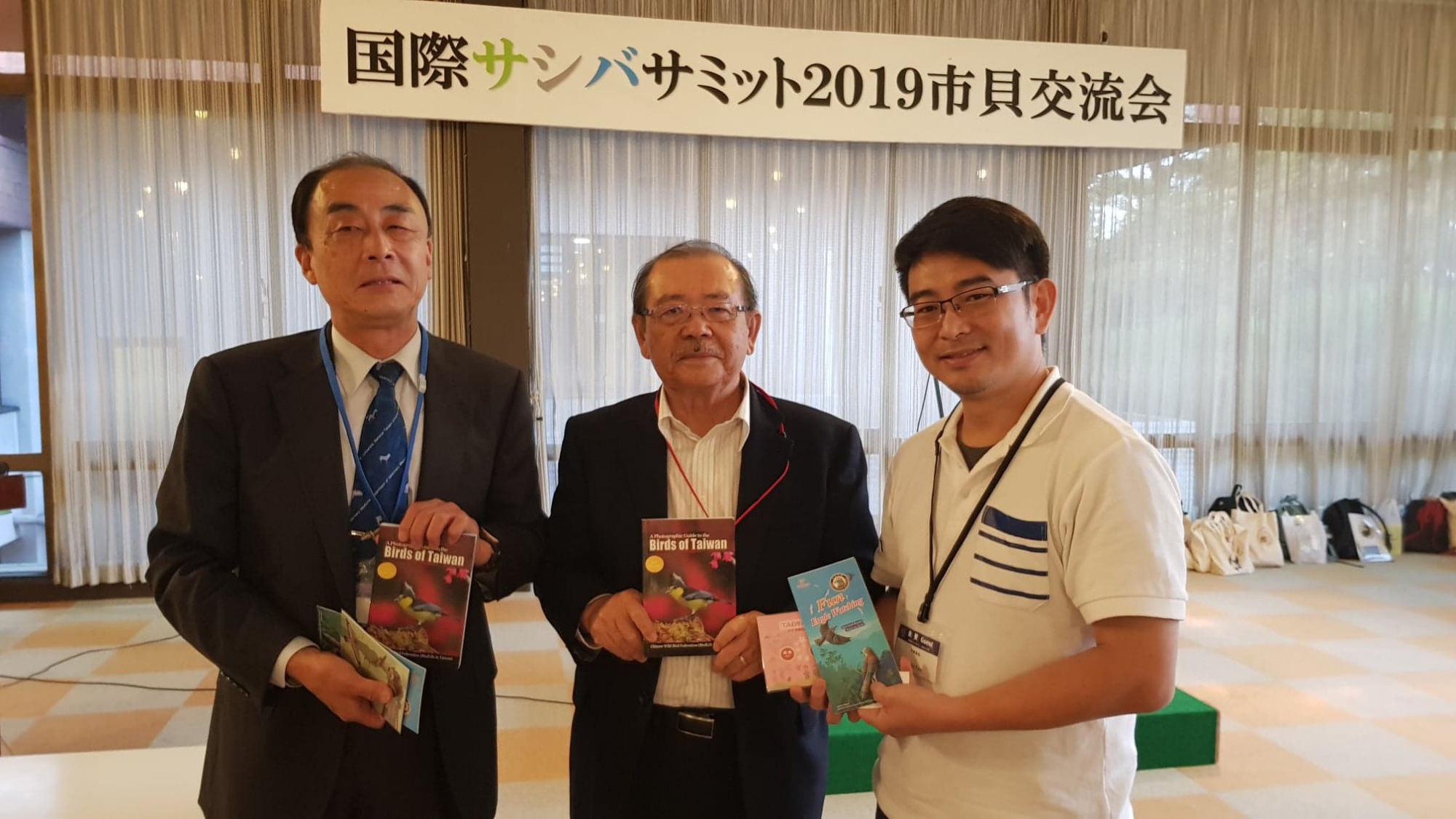 One other aspect that was really special was seeing how much the community came together to celebrate the Grey-faced Buzzard. Local shops had bags with a cute mascot version on it. That same mascot was on signs and other items posted around Ichikai town. It even adorned the CD we received of Sashiba No Uta. On top of that, local people were all very interested in talking with us and glad we had an interest in their community and their conservation efforts. It really made me think of the TWBF's logo of One flock, One future. I hope that we can cultivate that type of relationship here in Taiwan more often and make stronger those already in place.