This piece was first published in BirdingASIA: The Bulletin of the Oriental Bird Club (Number 37 June 2022). The Oriental Bird Club aims to encourage an interest in wild birds in Asia and their conservation; promote the work of local bird and nature societies in the region; support projects on the ground for research and conservation of threatened birds; and collate and publish information on Asian birds. The authors would like to express their gratitude to the OBC for allowing us to contribute this piece. To learn more about the OBC, please visit: https://www.orientalbirdclub.org/. 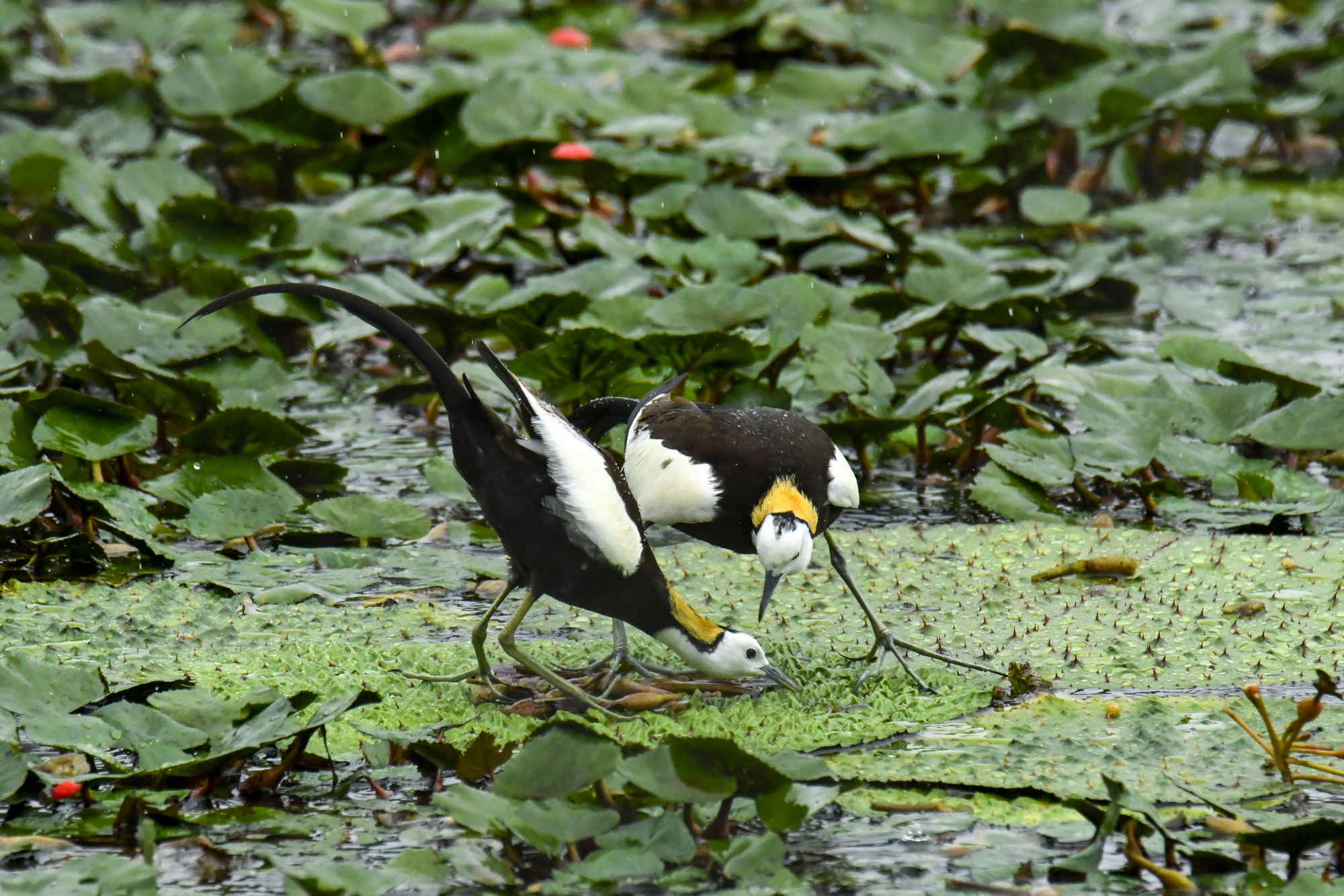 In much of its global range, the Pheasant-tailed Jacana is a common species. However, in Taiwan it is considered an uncommon resident. First recorded in Kaohsiung City in 1865 by British diplomat and naturalist Robert Swinhoe, its historic range extended from Yilan in the north-east down the whole of the west coast to Pingtung and Taitung in the south. But this population almost disappeared by the end of the twentieth century due to pesticide use, poisoning and, especially, habitat loss. The wetland habitat that the jacanas relied on for breeding and roosting disappeared as Taiwan's economy rapidly developed in the 1960s.
By the late 1980s, only 50 birds were thought to remain, in Tainan City's Guantian District. This area, Taiwan's top water chestnut producing region, supplied the birds with critical habitat for breeding. They could use the floating leaves and stems for nesting materials and forage for insects under the aquatic plants' leaves. It was here that conservation efforts for the jacanas began in earnest. In the year 2000, Taiwan's largest bird conservation organisation, the Taiwan Wild Bird Federation, along with Wetlands Taiwan, applied to the local government to create a conservation area in Guantian for the jacanas on land owned by the Taiwan Sugar Corporation. The 15-ha Pheasant-tailed Jacana Conservation Park, as it would later be known, would be managed by local NGOs, first by the Kaohsiung Wild Bird Society (KWBS) and later by the Wild Bird Society of Tainan. The park spearheaded community conservation efforts and ultimately led to conservation success. The success of this project has been remarkable: over 1,000 birds have been counted in annual surveys for the last six years running. 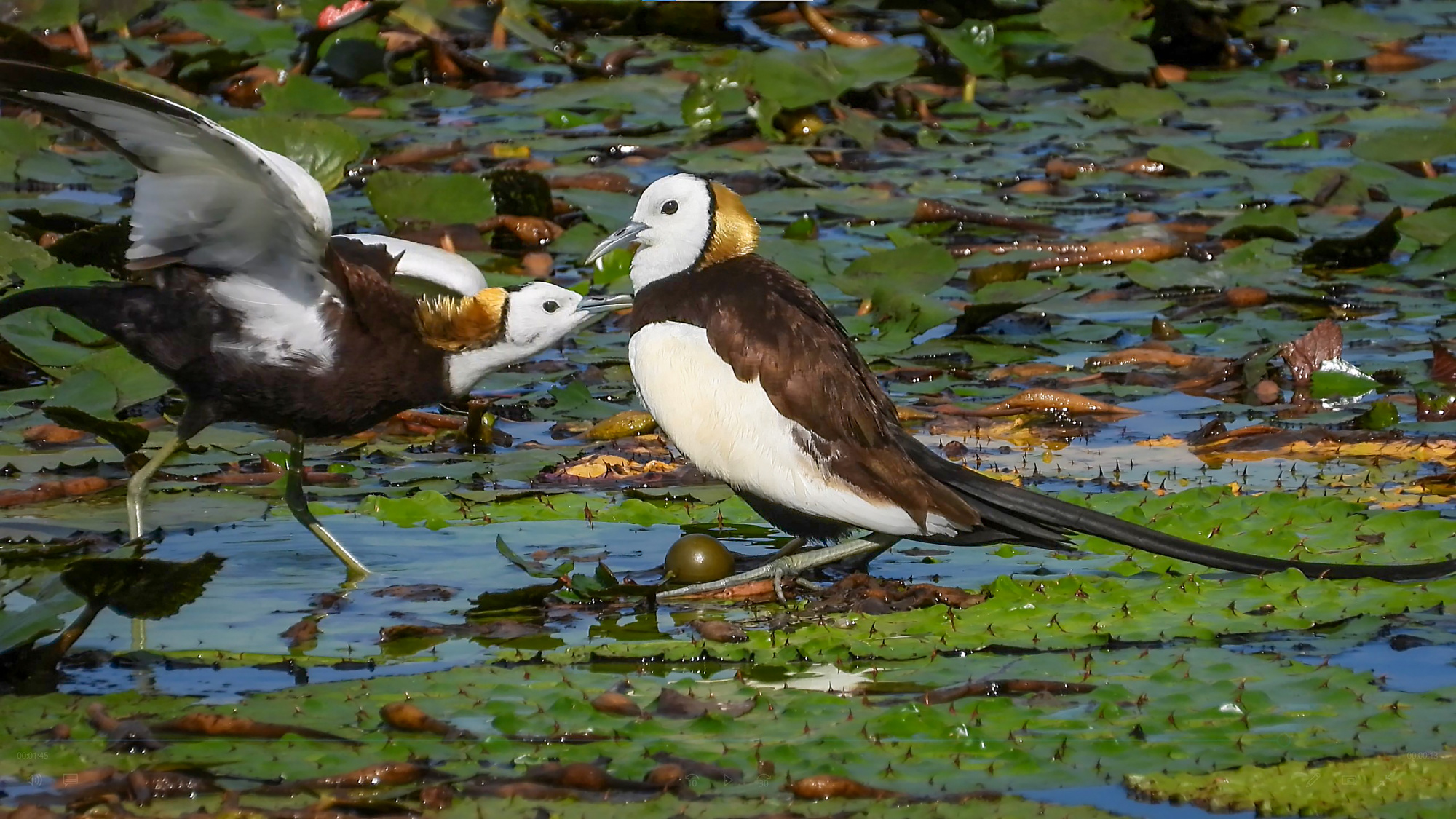 However, as the population has increased, notes of caution have arisen about putting all the proverbial eggs in one basket. Major concerns included the genetic diversity of the Guantian population, the risk of poisoning, an ageing farmer population, and the threat of possible land development.
Away from Guantian, small population pockets exist across Taiwan, confined to various water chestnut fields, artificial wetlands, or large ponds in stagnant floodplains. These are characterised as being sporadic and isolated environments which do not provide sufficient habitat or food to sustain larger populations. As many of the birds rely on agricultural cultivation cycles, once the harvest is over, fields are dried until the next cultivation period begins. The jacanas then possibly face a period of high mortality due to the disappearance of both roosting habitat and foraging areas. Therefore, more stable breeding habitat and yearround foraging areas are necessary to expand the population and improve its resilience. It was with this in mind that individuals and conservation groups in neighbouring Kaohsiung City began to discuss the creation of a second jacana conservation area to strengthen conservation actions for the species.

Kaohsiung City's Meinong District (Figure 1) is an important area for Taiwan's Hakka population, which first settled in the area in 1736. Today, over 95% of Meinong's population is still ethnically Hakka and many remain engaged in agriculture. One of the major local crops is white water snowflake Nymphoides hydrophylla, an edible plant tied closely to Hakka cuisine and culture. It's also one of the few aquatic plants among the floatingleaf varieties cultivated in large quantities in Taiwan. Grown in ponds requiring water levels adjusted at designated intervals, these areas traditionally provided excellent foraging for wintering jacanas. People in Meinong developed a deep relationship with the birds, locally referred to as 'water fairies' due to their ability to walk gracefully on the water. However, after the ponds are drained and cleaned after each harvest, they are not useable for breeding. Taking this into consideration, local people wanted to see if it was possible to create habitat to accommodate breeding jacanas. Therefore, in 2017, Liu Hsiao-shen, executive director of the Meinong People's Association, and his wife Huang Shu-mei, both members of the KWBS, applied to rent land adjacent to Meinong Lake for this purpose. Formerly known as Zhongzheng Pi, at 21 ha Meinong Lake (Figure 2) is Kaohsiung's second largest lake. Initially created as a reservoir to help with crop irrigation, it has since become an important site for both resident and migratory bird species. It seemed to be the perfect spot for jacanas to breed. This supposition was proven by the eight hatchlings counted that year, followed by six in 2018, 10 in 2019, and 17 in 2020. Efforts were further bolstered in 2020 when Liu and Huang began fundraising to do a public land lease of wetland habitat. They accumulated 69 donors, including both individuals and local groups, pooling enough money to rent the land now known as the Pheasant-tailed Jacana Publicly Leased Wetland. It contains 1 ha of land, including 0.5 ha of water space. 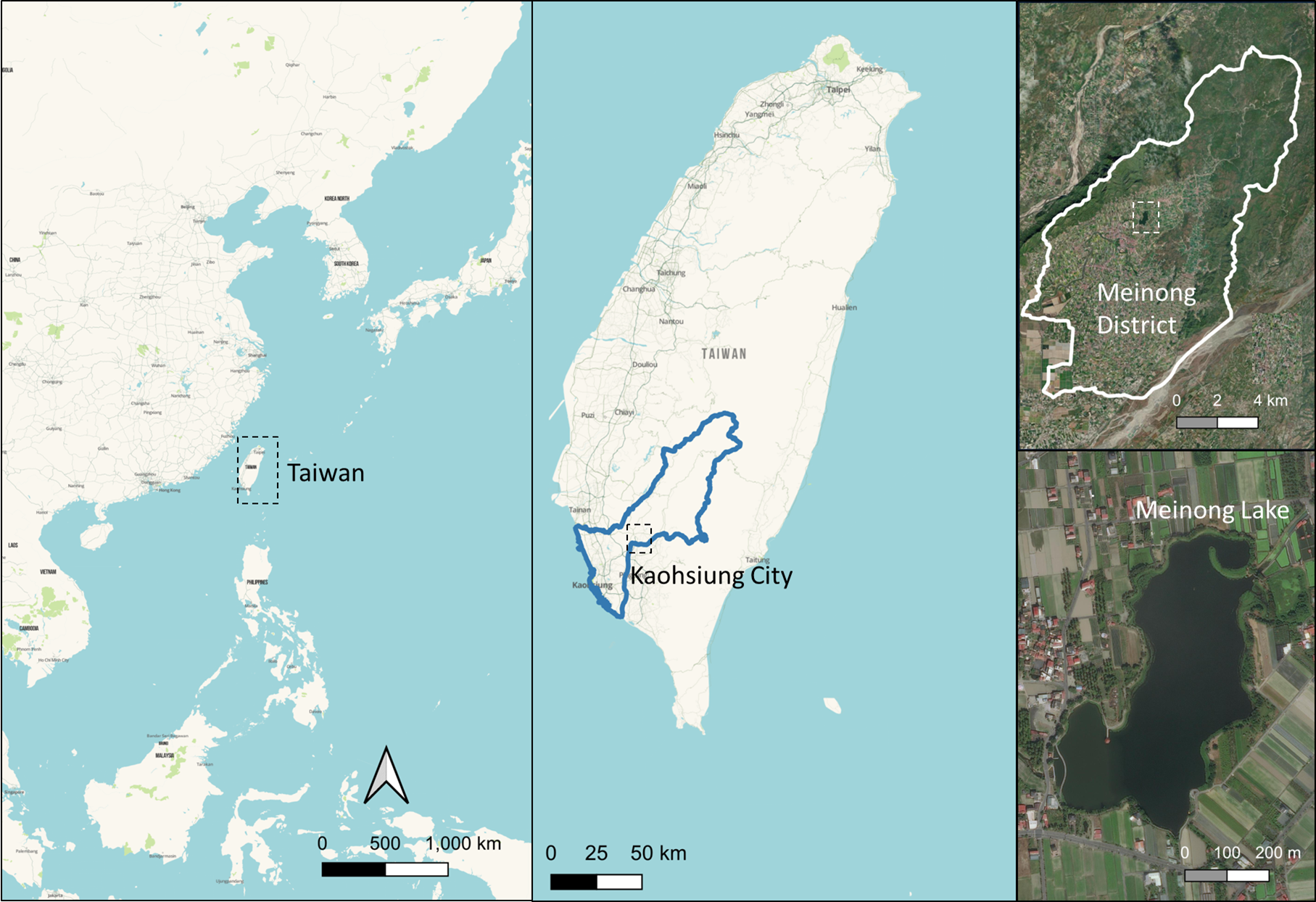 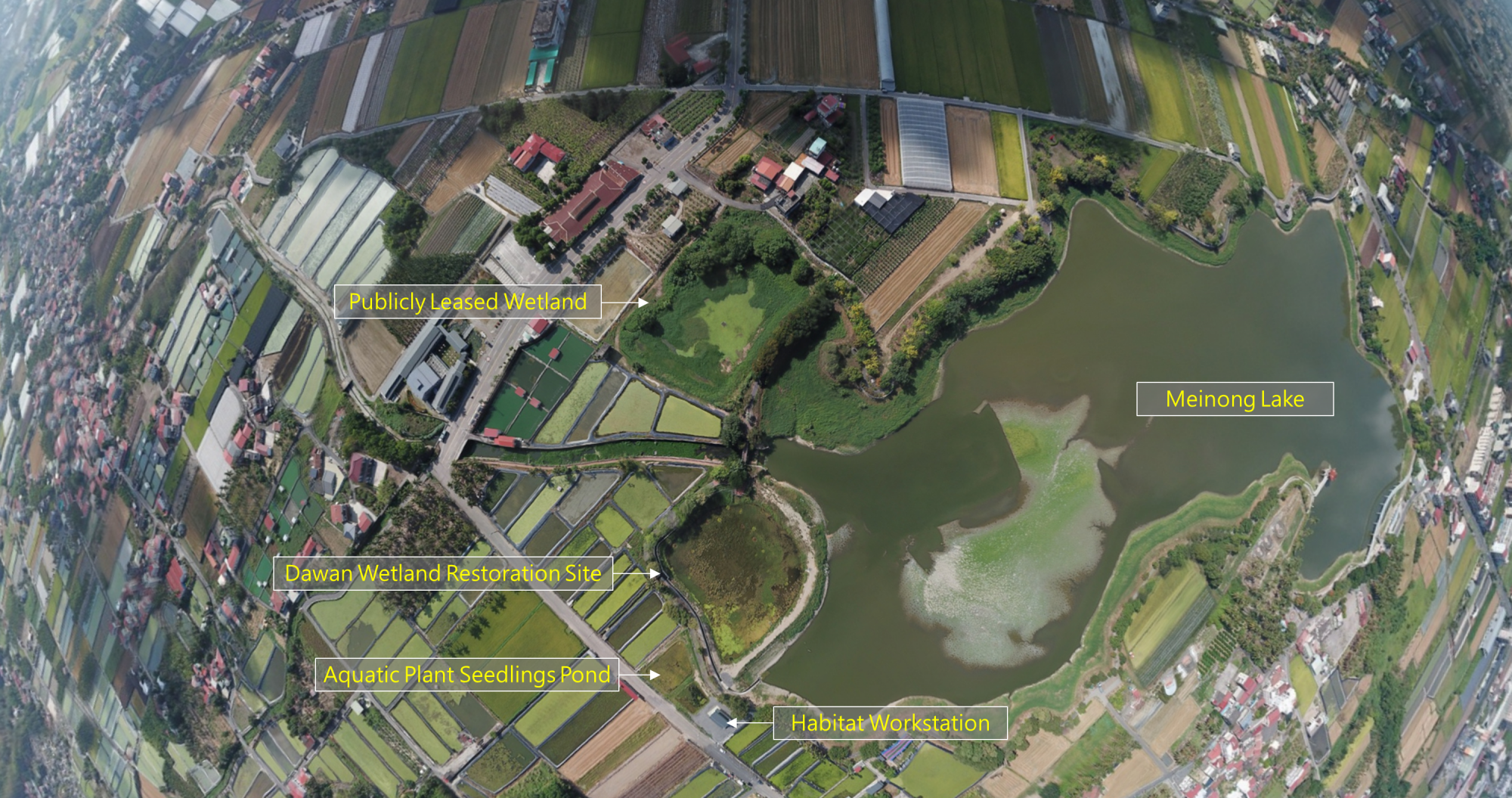 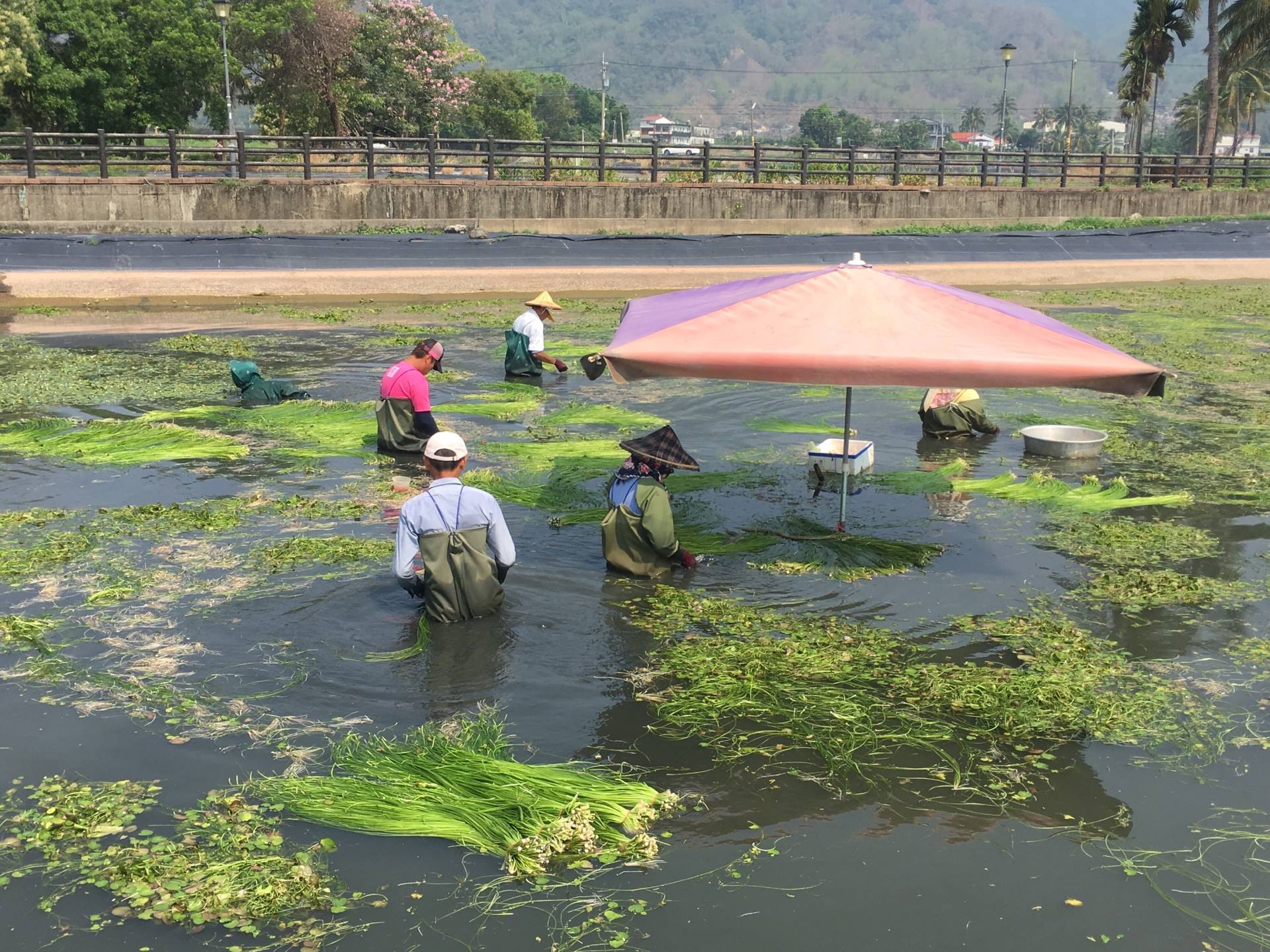 That same year, the Tourism Bureau of Kaohsiung City Government (TBKCG) announced its 2020 Meinong Lake Aquatic Environment Improvement Plan, which aimed to focus on enhancing the local ecosystem and the environment around Meinong Lake. Kaohsiung's largest bird conservation group, the KWBS, took this opportunity to pitch the Kaohsiung Aquatic Ecosystem Improvement and Public Participation Plan using Pheasant-tailed Jacanas as an Indicator Species to the TBKCG. The group contended that through habitat protection and creation, the results of conservation efforts could be quantified. Furthermore, by cooperating with the public sector on land management, larger areas of wetlands and floodplain could be adopted, leading to a larger habitat area which would in turn create more opportunities for breeding success and overall ecosystem conservation. Lastly, by providing a safe breeding environment through habitat creation alongside the already existing white water snowflake paddyfields, the area could become a breeding base for the population. Habitat restoration efforts could also have the effect of bringing back the disappeared aquatic plants and ecosystems formerly found at Meinong Lake. During negotiations, the tourism bureau agreed to help prepare the site while the KWBS agreed to assist in the subsequent public adoption of the land, management of the property and maintenance work. An agreement was reached on the proposal and site planning got underway.

In February 2021, the KWBS officially adopted the land and began management of the site. The Meinong Lake Jacana Conservation Area (its official name) (MLJCA) covers a total of 0.8 ha. This includes the Dawan wetland restoration site, an aquatic plant seedlings pond and habitat workstation. Operations are all volunteer based, with its management team consisting of Liu, Huang and Chung Yi-hsin. Meanwhile, the workstation is run by Chen Po-hao. All are from Meinong (aside from Chung who hails from neighbouring Pingtung County) and both Chen and Huang have had experience in both volunteer management and habitat restoration. 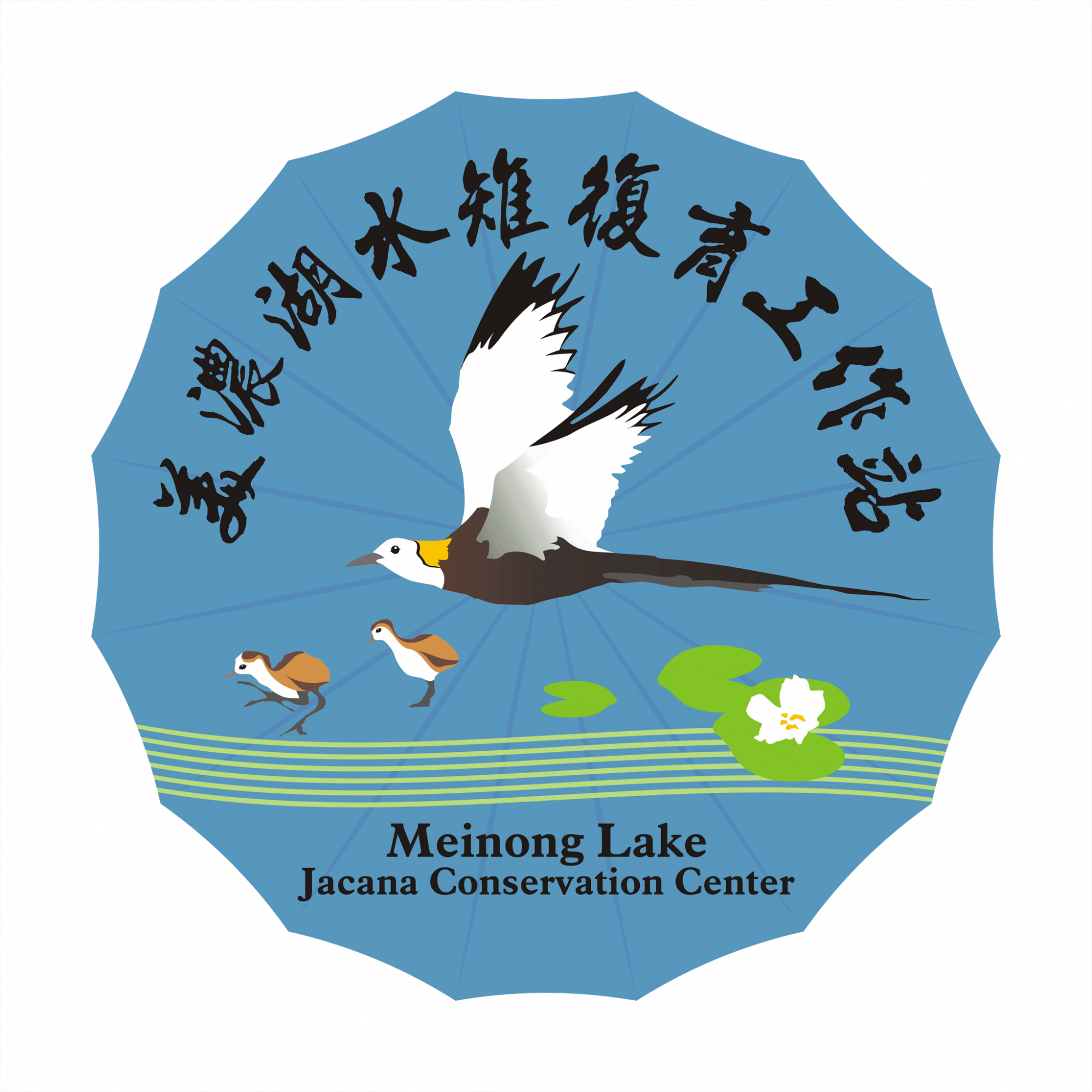 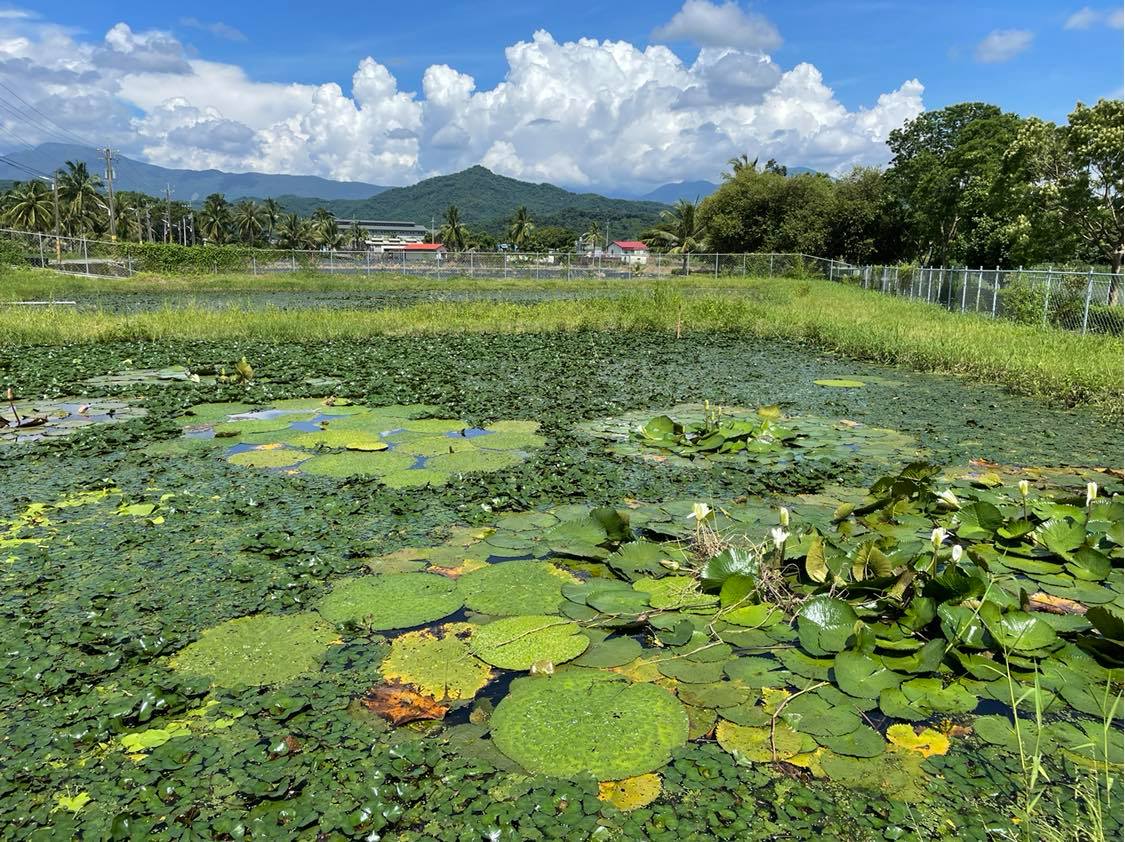 Volunteers are the heart of the operation, undertaking habitat work, environmental education, coordinating with local businesses, and cultivating eco-tourism opportunities for the area. Due to the strong networks already in place via longstanding and well-established local bird societies as well as civic NGOs, there are already 40 regular volunteers and 50–80 volunteers on reserve. Beginning in March 2021, the KWBS organised a series of on-site activities for those interested in volunteering. Some focused specifically on outreach. This is of particular importance as MLJCA volunteers frequently engage with the public, introducing local birds and discussing wetlands conservation in Mandarin, Taiwanese and Hakka. This has been effective in gaining support from local farmers who may have had misconceptions about jacanas and their roles in wetland ecosystems. For some, they gained a new appreciation for this species, which they now know eats insects that could harm their white water snowflake crop. Farmer patrol groups have even been formed to periodically check on the site. These efforts are currently supported by Taiwan's Forestry Bureau. 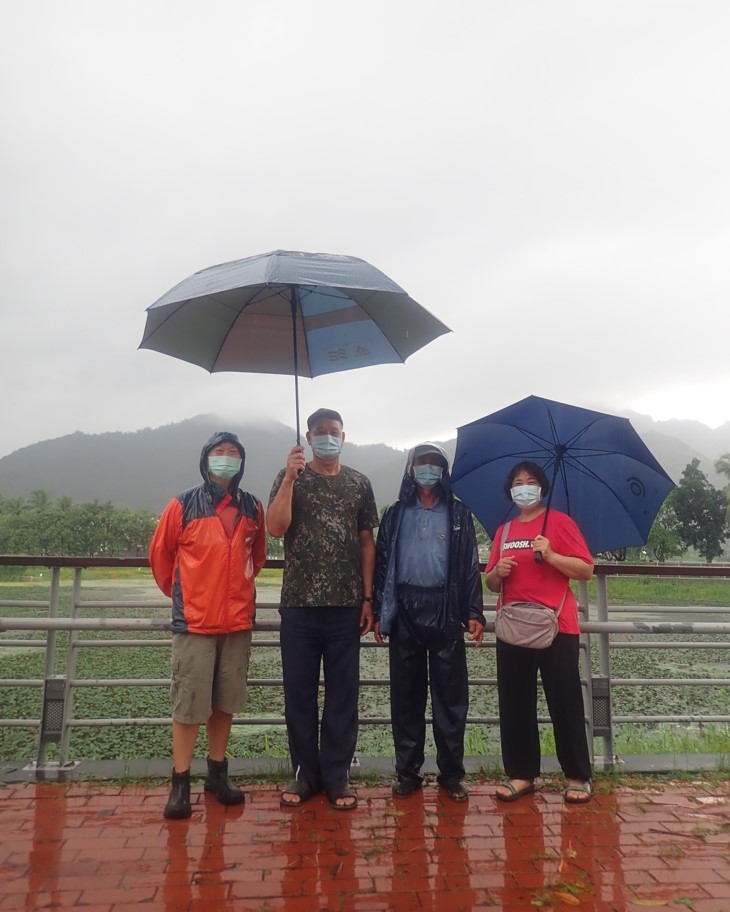 The MLJCA has already welcomed many local groups of volunteers to help with the habitat work. This has included several student groups from schools like Dongmen Elementary School, National Chiayi University and Chimei Community University. Community groups and local birders have joined in to lend a hand as well.
All help is welcomed as restoring a wetland habitat is no easy task. First, grasses and weeds had to be removed. Then the area had to be prepared for the return of water to what had become dry land. After this, plants were selected that reflected the local ecosystem dynamics and provided for the habitat and foraging needs of the jacanas. In March 2021, the Dawan site saw its first aquatic vegetation. In small amounts, water chestnuts from Guantian as well as prickly water lilies were placed on site. The prickly water lilies were chosen as they are big, leafy, and lay on the water surface. On 1 May 2021, 62 volunteers gathered at the MLJCA for the Big Plant Day. During this time, the bulk of the vegetation was added, including more water chestnuts and prickly water lilies, as well as several smaller water plants such as pygmy water lilies, nymphea lotus, water primrose, Asian lizard's tail, yellow pond lily, Hygrophilia pongocalyx, Rotala rotundiflora, and water hyssop. The aquatic plant seedlings pond has many of these species on hand as a backup in case something happens to those at Dawan. The event even received national media coverage, with Lin Kun-hai, the KWBS's General-Director, and the MPA's Liu talking about the new project with reporters. 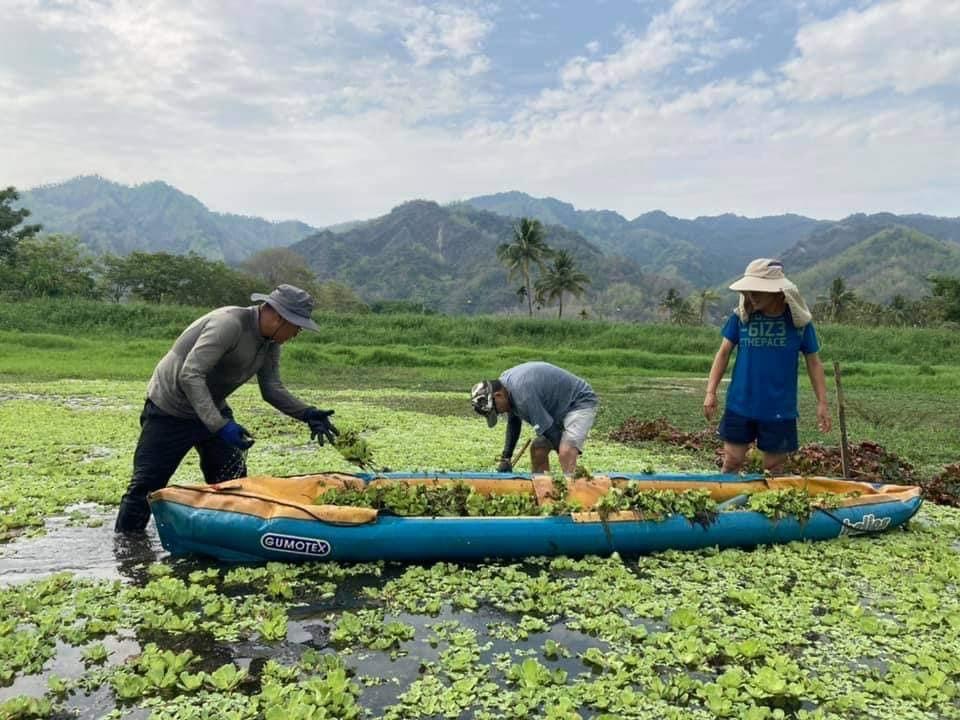 The breeding season for the jacanas begins in May and conservation efforts showed some positive results almost immediately. In Dawan, 2021 saw three nests and eight chicks recorded at the site. Updates about the MLJCA and its feathered residents are provided by diligent and social mediasavvy volunteers. They use a Line Messenger group where there is a near-constant exchange of information and photos. Meanwhile, a Facebook group has been created where regular updates, including photos and videos, are shared with the public. As Facebook is the most widely used form of social media in Taiwan, it has brought a lot of attention to the work being done by the MLJCA volunteers and already has over 2,500 fans. 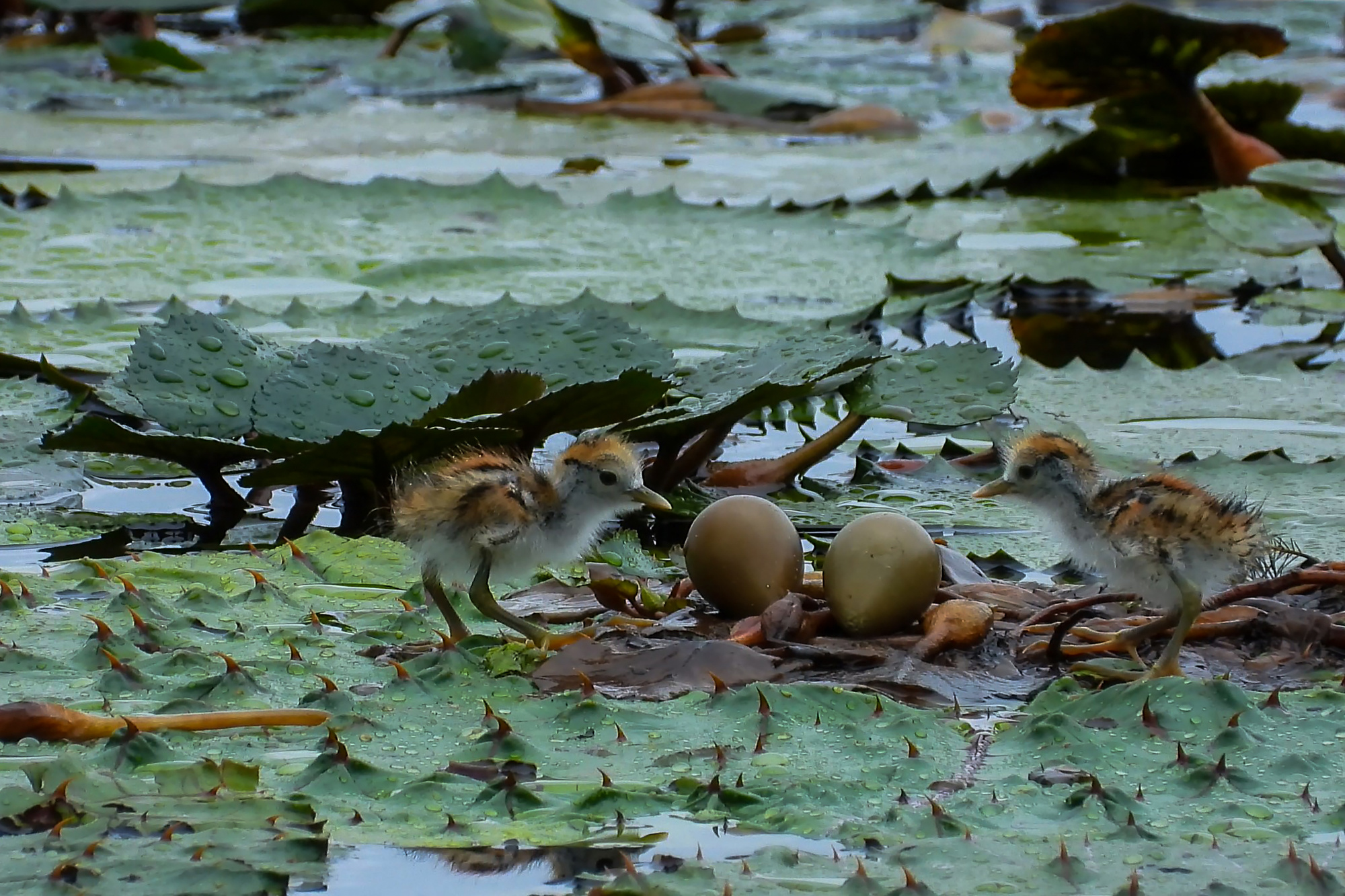 Since the start of 2022, 32 jacanas have been recorded around Meinong Lake. One nest has also already been observed as of April 2022. Moving forward, more work is planned to improve habitat quality, increase community involvement, and encourage jacanas to breed in the area. This means that there is still much to be done. In the near term, the staff and volunteers plan to focus on the best forms of germination of prickly water lilies to help improve habitat availability for the jacanas. Plans for designing light ecotourism are also in the works. It is hoped that guests can come to experience the local ecology and visit sites related to Hakka culture, including white water snowflake paddies, paper umbrella and blue dye learning stations, and historic sites. The stars of the show will remain the water fairies and the many other species that benefit from this habitat restoration work. In the longer term, once the situation at Dawan has stabilised, the KWBS plans to look for other suitable areas nearby where they could use the seedlings from the seedling pond to create more jacana habitat.
To learn more about the Meinong Lake Jacana Conservation Area and other projects by the Kaohsiung Wild Bird Society, please contact the authors (see below) or visit the MLJCA Facebook page, https://www.facebook.com/groups/1977255549258794.