By Susan Bonfield / Environment for the Americas   【中華飛羽297期】

Over 1,000 years ago, ancestral Polynesians set off in a boat in search of a place they thought existed. Historians believe that migrating birds guided them. During the day they could track a long-legged wading bird by sight, and by night they could follow their loud calls. The Polynesians, who would become known as Maori, did find their land in what is now known as New Zealand and the bird continues to be a symbol of strength and leadership.  We know this bird as the Bar-tailed Godwit.

In 2009, researchers from Point Blue Conservation Science and the US Geological Survey stood in the same place as newly arrived Maori with three of the birds cradled in their arms. Outfitted with transmitters, the birds would leave New Zealand gathering data that would give us an even greater respect for the journeys migratory birds undertake.

One of the birds, cleverly nicknamed E7, was recorded making an amazing circular flight from New Zealand north to the Yellow Sea before returning to nesting sites in Alaska’s tundra. After nesting was completed E7 began its return journey to New Zealand, flying nonstop for 8 days to cover over 7,000 miles over water, without stopping and without eating.  We get this perspective from today’s technology, though the Maori, with their incredible journeys likely accompanied migration and saw more than most modern-day naturalists.

Long distance migrants have always been extraordinary but we now have the means to learn much more, and discover more about this remarkable feat of nature.  We have learned a great deal about bird migrations by direct observation but our ability to track birds using new technologies, such as the tracker that E7 carried, enable us to look  at how birds migrate over vast distances and the habitats they use at different times during their life cycles. Global tracking technology allows us to understand threats to birds and to take actions to protect them. 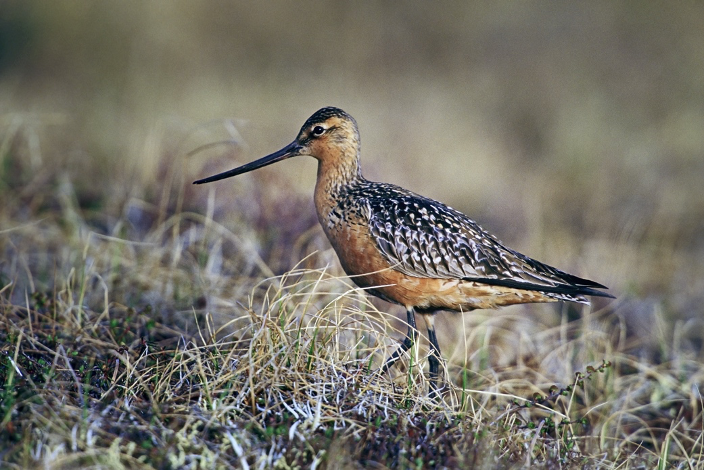 E7's migration was fraught with hazards. Natural events such as storms and high winds are complicated by human impacts. Preferred stopover sites in the Yellow Sea have been affected by development and loss of mudflats godwits need. Human activity on New Zealand’s beaches disturbs foraging birds, and changes in climate are causing shifts in ocean currents, resulting in less predictable weather patterns that can threaten migration. Taiwan, a likely stopover site for godwits, has as many as 75 wetlands and marshes, most coastal, that are critical for both migratory and resident bird species.

In 1993, the Smithsonian Migratory Bird Center created a hemispheric event to connect people to bird migration, to raise awareness of this phenomenon and to serve as a call to action to help protect birds. Today, World Migratory Bird Day (WMBD), is implemented globally by a partnership of Environment for the Americas, the Convention on Migratory Species, and the African Eurasian Waterbird Agreement.

This year, we are sharing the story of E7 and other migratory birds through our education campaign and theme Birds Connect Our World.  Birds depend on connected habitats over vast distances, on migrations that transcend our human's eye view of the world and challenge our research and management strategies. This year's theme emphasizes the connectivity of habitat across the world, and the ecological and human connections birds make across borders, continents and oceans through their long-distance travel. It also highlights the many ways that each and every one of us can participate in their conservation.

For the first time, World Migratory Bird Day highlights the East Asian-Australasian Flyway, which stretches from Russia and Alaska to the north and Australia and New Zealand to the south. In between, it encompasses East Asia, including Taiwan, and eastern India. Almost 500 bird species and an estimated 50 million migratory waterbirds travel between breeding and non-breeding sites along this flyway. The Bar-tailed Godwit, a WMBD highlighted species, illustrates not only the spectacular phenomenon of migration because of its remarkable non-stop flights, but also the importance of connecting the 23 countries whose borders fall within this flyway in conservation actions.

World Migratory Bird Day 2020 officially launched on the traditional celebration date of the second Saturday in May, or May 9th. But because of the nature of bird migrations, which occur throughout the year, programs and events are hosted year-round, and a second date is celebrated on the second Saturday in October (October 10th) to recognize southward migrations. To learn more about the program and the actions you can take to protect birds, visit our website at migratorybirdday.org.