首頁 / The Story of the Siberian Crane Rice

The Story of the Siberian Crane Rice

The Taiwan Wild Bird Federation's annual General Assembly was held on September 24, 2022 at Zhongshan Elementary School in Yilan City. As the local host, Wild Bird Society of I-lan president Chen Jie-peng and director-general Chen Shu-de enthusiastically assisted in helping with booking the venue, finding the accommodations and handling a number of other arrangements. Meanwhile, the Yilan County Agricultural Department, knowing that delegates would be coming from all over Taiwan to attend the meeting, prepared a special souvenir of "Siberian Crane Rice" for the visitors. Though only pocket-sized, the story behind this gift represents an important achievement in bird conservation this year. 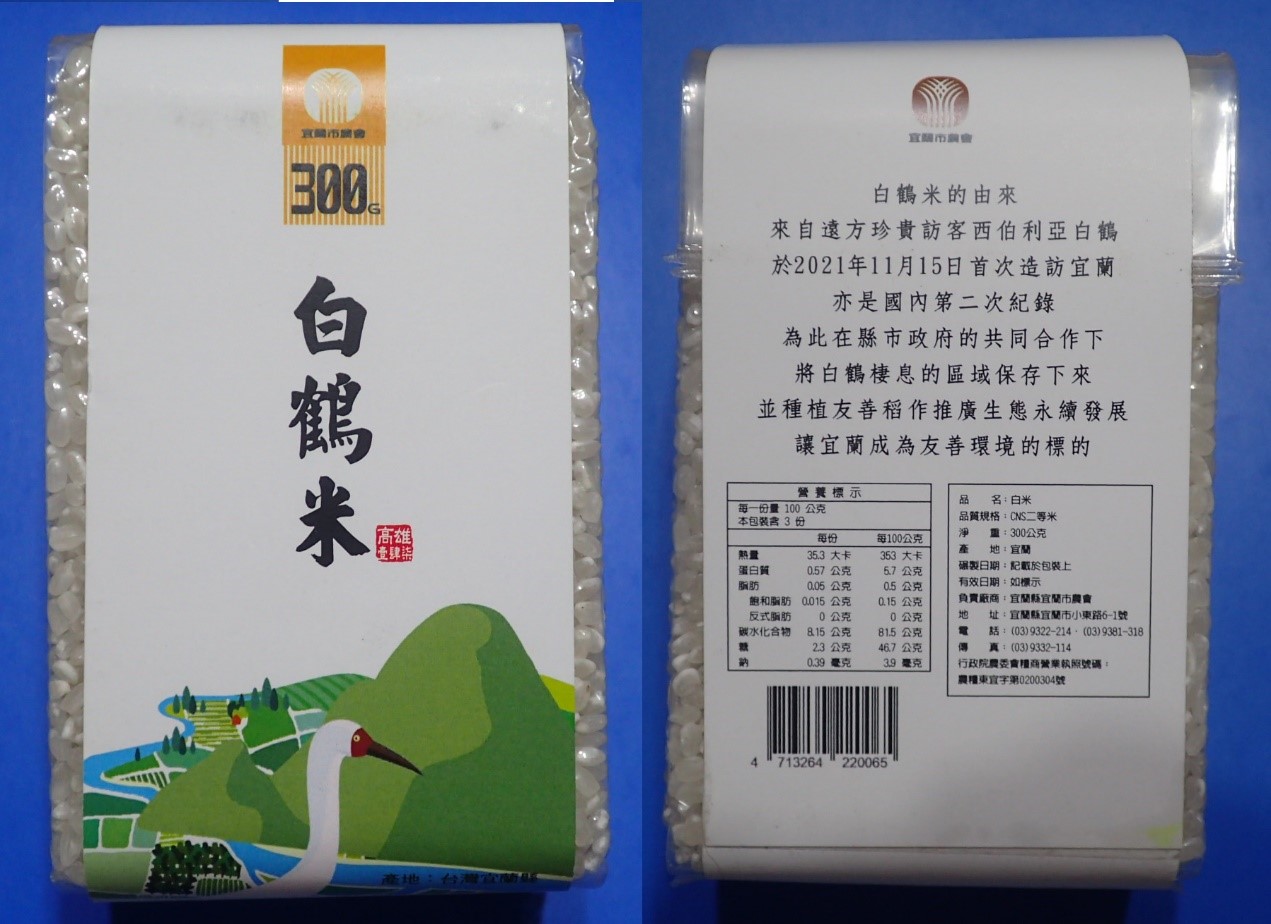 Printed on the delicate packaging, it says "Origins of Siberian Crane Rice: The Siberian Crane, an extremely special visitor from Siberia, visited Yilan for the first time on November 15, 2021, which is on the second record for the species in Taiwan. Because of this, both Yilan County and Yilan City governments worked together to make sure that the area where it stayed was undisturbed and well maintained. Not only that, but eco-friendly agriculture using the tenets of sustainable development was promoted. These actions made Yilan a more nature-friendly environment.”

Director-General Chen explained further. When the Siberian Crane appeared in a farmland near the Yen Ping Kai Xing Temple in Yilan City, it immediately became a magnet for bird watchers and bird photographers, attracting people from all over who were interested in catching a glimpse of the critically endangered species. Therefore, to ensure its safety and security, the municipal government of Yilan City coordinated with local farmers and volunteers to protect it. To prevent the bird from being disturbed by birdwatchers, they put up signs and installed surveillance cameras around the habitat. They also called on the public to keep quiet and not make noise. Furthermore, they asked birders to maintain an appropriate distance while birdwatching and adhere to the principles of "no contact, no disturbing, and no feeding". Temporary parking lots were also created and local residents were asked to assist in maintaining order there. This led to a peaceful coexistence between the Siberian crane, the local residents, and birdwatchers.

When winter began to turn to spring, it was traditionally the time for sowing seeds and tilling the earth. Yet thanks to a number of personal donations, the land was able to be protected from disturbance even though it was the planting season. The municipal government also actively coordinated with farmers near the habitat, encouraging them to do eco-friendly agriculture on that 1 ha farmland. Meanwhile, cultivation was totally suspended in the area considered the Siberian Crane's main habitat. These efforts ensured that the crane could forage and rest safely. The surrounding fields were then used for water storage. Also, the use of chemical fertilizers, pesticides, and herbicides was stopped in favor of eco-friendly farming practices. Personnel were sent on a daily basis to observe and record the situation near the habitat as well.

When spring finally did arrive, the Siberian crane began to take to the sky for longer and longer periods. Finally, on March 8, 2022, with the community watching their new friend and neighbor, the Siberian Crane headed north to its breeding grounds. Once it was confirmed that the bird was safely on its way, the local farmers were asked if the area previously protected as the crane's main habitat could be converted back to farmland in order to at least have some harvest for the season. An earnest effort was made, and at the end of July, this eco-friendly agricultural land was ready for harvesting. The city government, community, and conservationists jointly declared the yield the "Yilan Siberian Crane Rice".

Before convening the General Assembly, Director-General Chen wanted to share this story of community, conservation, and cooperation with the participating delegates.  To do this, he wanted to provide the rice cultivated on the prior Siberian Crane habitat as a gift. He approached the section chief of the Animal Husbandry Section of the Yilan Agricultural Department to see if it was possible. The section chief was more than happy to oblige and immediately contacted the Yilan City Farmer's Association to ask if there was any rice from that area already packed and ready. They replied, "There is no stock currently, but we can pack it for you right now!" The result was the rice distributed to the delegates on September 20, 2022.

In this special case of the wintering Siberian Crane in Taiwan, it would not have been possible without the support of the Yilan County and Yilan City governments, the local community, the passionate birders, or the local farmers who shifted their production to eco-friendly farming practices in order to maintain the necessary habitat. It is hoped that this experience might plant the seeds of s stronger coexistence with nature in the hearts of the people, and in the future, they will take root, blossom and bear fruit. Thus creating a long-lasting result to this precious experience.

The TWBF is dedicated to doing research, conservation action, citizen science, and international collaboration to conserve birds and  their habitat. If you would like to support our work, a donation of any amount is greatly appreciated as it would help us do more to       accomplish these goals!